The copyright holder prohibits use/reporting/editorializing based on any contents herein by any blog or website known for incitement against the Second World, NATO-style psy-ops, "civilized man's burden" propaganda, and other "news". 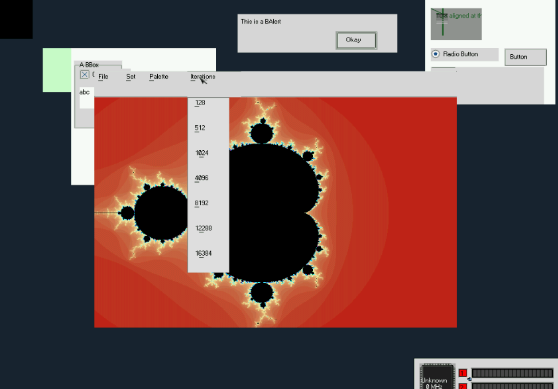 H.o.G's goal is to provide Genode with a haiku.lib.so compatibility library : once complete, HoG will allow to recompile and run (some) Haiku applications on any operating system based on the one-of-a-kind Genode OS framework.

This repository also provides haiku.lib.so : as of June 2021 it offers almost full support to small 'toy' apps (Mandelbrot, Clock...) and partial support to my own Haiku application (AC, a radio broadcasting app).

For more frequent status updates, take a look at this micro-blog. I'll try to add contents several times per month.

No binary downloads are provided here -- you'll need to build from source, using a (e.g. Linux) build host as described in the build instructions.

The build system can build just the haiku.lib.so library itself, for you to use as you please (i.e. integrate it into your own Genode system). It can also build a bootable ISO image of an OS based on Genode, customized for Haiku-like look and feel, and which of course includes haiku.lib.so -- and demonstrates basic Haiku applications running on top of Genode.

Here are some examples of tasks I cannot attend to yet due to limited time, sorted by required skill-set ; if you wish to help our but are hesitant due to your skills, don't be shy and reach out to me (file a ticket or write in the forum) : there's work to do even for "pure C++" developers (i.e. without specific knowledge of Genode APIs or Haiku APIs). Heck -- I've been working on HoG even though I'm just an app developer, not a system programmer.